This is my roundup review of best PCIe WiFi cards in 2022.

It’s long been understood that desktop computers are a pain to set up. In houses without a good ethernet connection, you may be running cords across ceilings or across the floor.

Years ago, a truly fast and powerful wireless desktop setup was expensive and not that practical.

Today’s PCIe WiFi cards are more cheaper and provide more signal strength than ever before.

In this hardware roundup, I’ll review 4 of the best PCIe WiFi cards on the market and help you make a great decision.

I have options for every budget and even a unique USB adapter that I love for it’s simplicity and plug-n-play nature.

If you are tired of looking at 20 foot strands of RJ45 cord in your living space, you’ll want to pick one of these up. 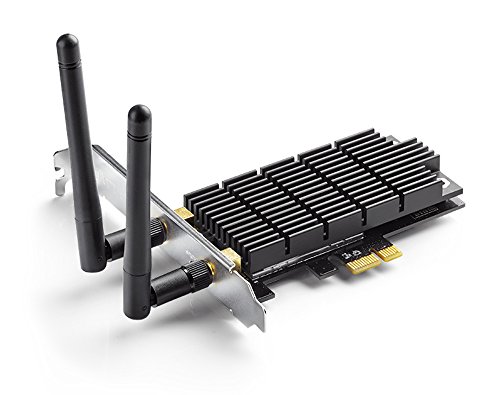 I love the TP-Link Archer T6E because it is a solid, reliable, no-frills WiFi adapter and basically cheap enough that anyone can afford it.

Add to this that they have very good tech support and a decent warranty, and even a computer novice can go from wired to wireless pain-free.

AC1300 means the theoretical bandwidth of this bad boy is 1300mbps.

That’s some top-speed service but there is a caveat. Since this is a 2.4G/5G combo, it is dual-band.

The AC number is actually cumulative depending on the number of bands so realistically this will operate at speeds of 867 Mbps at 5Ghz and 400 Mbps at 2.4GHz.

The antennas really ensure that this gets some pretty good signal allowing you to be a bit further than the router.

That doesn’t mean it’ll do well trying to fight through a bevy of concrete walls though so pay attention to such things.

While an excellent PCIe card this one is showing some signs of age by lacking any sort of Bluetooth connection.

I personally loved the TP-Link Archer T6E but have moved on to use my airpods without being held back.

There is hope though, newer models do come with Bluetooth so keep your eyes peeled. 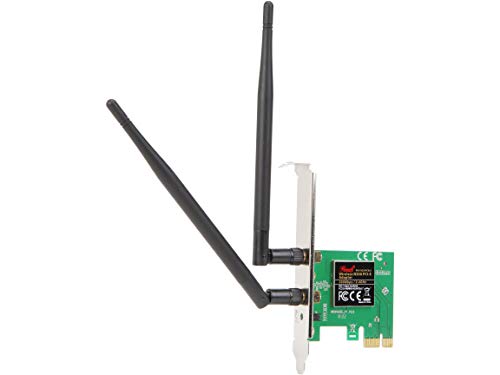 Sometimes space inside your desktop is at a premium. Additionally, many of us dread cracking open our desktop for a Wireless Card update when we might not currently need it.

What Rosewill offers is an awesome little WiFi card. It isn’t as fast as the highest quality WiFi solutions but can plug and play in a variety of setups.

That also makes it perfect for unique setups like an office that might need Wifi occasionally with different machines while running off of a hotspot.

The flexibility of the Rosewill is awesome and it is freaking tiny.

That means it is perfect to store away in a backpack or laptop case and pull out to help people at the office. When I worked in IT, I used these when repairing PCs.

It made it so much easier to pull a desktop computer out and get WiFi without needing to crawl back under a desk or wrap hundreds of RJ45 cables around the office.

It isn’t the most powerful but realistically things like gaming don’t take as much bandwidth as people think (They design them not to suck a ton of bandwidth) so 300Mbps is fine for light activities.

Where it starts to slog is downloading that 200GB Rockstar game that just came out.

If you do need more speed though, a couple of stronger versions exist as well! They generally cost a bit more but go as high as 1200Mbps bringing you a powerful mobile option.

They do get larger in size though so be aware it might not be a ton of fun for a laptop setup.

I love the cherry red look of some products such as SoundBlaster audio cards. The ASUS PCE-AC88 not only looks sharp, but it’s also a pretty powerful device.

With four antenna that can be mounted directly on the PCIe card or on top of the desktop, you don’t need to worry about space concerns.

And it’s blazing fast. At 2100Mbps you get quite a bit of power and the range is nothing to frown about.

Generally, PCIe cards can’t take advantage of all the fancy features that are offered but this one does offer MU-MIMO.

For those who don’t know what that means, MU-MIMO means that antennas send information concurrently instead of alternating between devices.

What that ends up doing is minimizing the lag between connected devices immensely.

I believe the router also needs to be a MU-MIMO compatible device but that should be another way you can get a sweet setup for your gaming sessions.

I recommend this if you have really fast internet but don’t seem to be taking advantage of all that speed.

It greatly increases the bandwidth to your desktop setup. One downside is for the price you should get Bluetooth but do not.

If you don’t care about Bluetooth (it is a niche technology) then this will do just fine and scratch that itch for face-melting internet service. 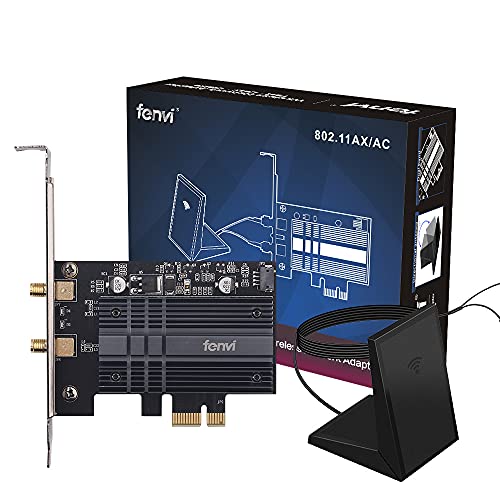 Fenvi is a relatively unknown player in the PCIe adapter market and has created one that has pretty incredible specs.

This is bizarrely top heavy meaning you’ll want to use the 5GHz option if possible.

Keep in mind that the 2.4GHz range is better so running at such a low-speed at 2.4GHz means you’ll want your router close to this puppy.

There are also a range of best compatibility options for the Fenvi AX200.

It’s compatible with a huge array of builds but you might need to check the list and find out if your build is acceptable.

If it is not, you may be able to get a software update from the company directly as many have said in the product reviews.

I personally like the claims of the Fenvi but I’m a bit suspicious of the real world use if you have a concrete wall between the router and your desktop.

That being said, it’s really affordable so you can definitely take a risk and feel ok with this. Many love it, many loathe it.

Regardles Fenvi has been known to try and make right with issues and can be contacted fairly easily.

If you want a risk free option though, I suggest the ⅓ speed but similar priced TP Link option.

It’s reliable and a workhorse but it doesn’t have that raw horse power this model has.

One thing to realize with wireless cards is that while they are powerful, they’re still subject to the same interruptions that poor materials or distance can create for different signals.

That means it’s important to make sure you’ve put your Router in a good location and have considered what materials are between it and you.

Additionally, the 2.4GHZ band is prone to interference but does go further so you can use that if you have a router that is very far away and fewer devices.

Wireless networking is such a great upgrade to any system, especially a desktop. It makes where you place your office a lot more convenient and helps eliminate unsightly RJ45 cords.

There isn’t really too much of a difference in speed as well if you get a nice PCIe card. Stability and speed in today’s cards is just amazing compared to those a decade ago.

Our list has options for the mobile such as our USB option, and for those who want the Ferrari of PCIe cards like the Asus option.

Either way, we think going wireless is just a great investment.

It’s 2020 and you never know how much space it’ll free up when your desk doesn’t have to be physically near the router.

As always we appreciate you reading our guides and hope to see you again!