The Corsair iCUE 220t RGB is a compact mid-tower chassis that comes with many goodies in the form of removable dust filters on all intake areas, three pre-installed SP120 RGB PRO fans, different AIO mounting options, and high-end construction quality. 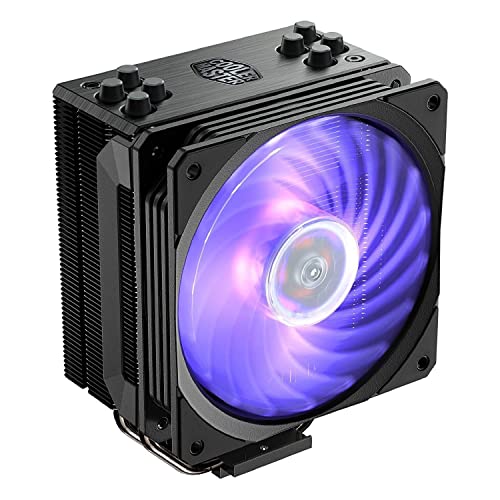 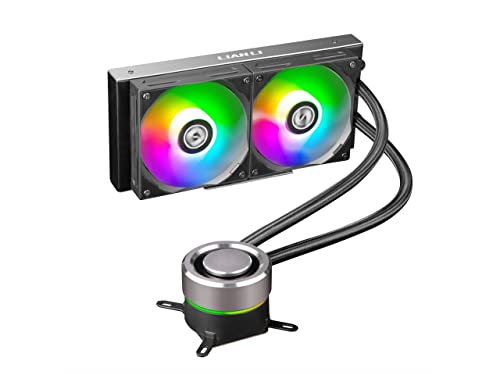 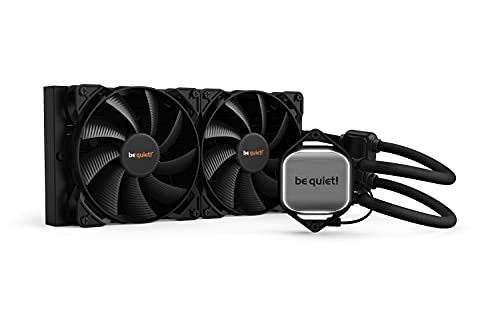 It’s very versatile when it comes to CPU cooler compatibility. If we talk about air coolers, you can fit those with up to 160mm height – meaning all models except the likes of Dark Pro 4 and Noctua NH-D15 are compatible.

For AIO coolers, you can have any model with 120mm to all the way 360mm rad – depending on the location.

Since we all have different preferences, we have included air as well as AIO options in this roundup.

The Hyper 212 Black edition RGB is one of many upgraded variants of the original Hyper 212 Evo.

The original Hyper 212 Evo was released almost a decade ago and has since achieved a cult status among PC enthusiasts and overclockers due to its great value for the money.

The Hyper 212 RGB is similar to its predecessor in terms of design as both have same dimensions and heatsink style.

Behind this fan, there are four U-shaped heat pipes making way into heatsink stack and connected with each other at the copper baseplate. A top cover made up of brushed aluminium is placed over the heatsink which, along with capped heat pipes, gives the cooler a premium touch.

As its name suggests, both the heatsink and fan are colored black which makes it perfect for black version of Corsair 220t. The heatsinks as well as heat pipes are nickel coated to have a little stealthy looks but it can peel off. So, handle it with care during the installation process.

During our testing, we found it to be better than the other 212 versions in the market.

But some other coolers such as Arctic Freezer 240 and be quiet! Dark Pro 4 managed to give better results in both temperature handling and ambient noise.

This was kind of expected, to be honest, as the 212 RGB comes at almost half the price of these two and there are very few coolers that can give you such results in this budget range.

The things we liked in this cooler include easy to follow installation process, different accessories out of the box, and RGB implementation.

In case you’re not interested in the RGB, there’s 212 Black ‘Stealth’ edition for you. It’s identical to this cooler but with no RGB lighting.

Since Corsair 220t comes with three RGB fans, it goes perfect with an RGB AIO. That’s why we have the Lian Li Galahad 240 up next.

Lian Li is a familiar name in PC industry and they’re known for their premium chassis. But this is the first thing we’re seeing their AIO cooler.

In terms of design, it looks similar to any other AIO in the market with black-color coating on CPU block, tubing, and radiator.

But there are some subtle differences too.

The radiator, for example, has aluminum side-panels which adds to its beauty but also makes it a little heavier. It also has a fill port so you can refill it in future if you want to.

You’ll also note that the fittings here come in a hexagonal shape instead of being circular.

The pump block is also circular and can be rotated 360° so that the Lian Li logo stays on right side regardless of your orientation. In case you don’t like this logo, there’s an aluminum cap that attaches magnetically on top of the block to cover it.

The Galahad 240 performed exceptionally well in thermal testing, even surpassing some 280mm and 360mm models. This high performance is partially due to the high-speed fans. The downside, however, is that they’re loud at maximum speed touching 50 dbA mark.

You can adjust the fan curve according to your liking, but it will certainly raise the temperature level a little higher. And we would’ve liked the ARGB implementation to be a little refined as it’s a slightly length process right now.

With that said, its pros outweigh the cons by a healthy margin. And once you add in the 5-year warranty, the Galahad 240 becomes a quite attractive option for a 240mm AIO.

Our last recommended cooler for Corsair 220t is the be quiet! BW007 Pure Loop.

The first difference you’ll see in this AIO is the compact CPU block. This is because the pump in now placed in the 400mm-long sleeved tubing rather than the radiator or CPU Block.

There’s an array of white LEDs on the CPU Block. This white lighting contrasts well with the overall black theme of tubing and radiator, but RGB lovers may not like it.

Other thing we liked here is the extra coolant that comes with other accessories. You can fill this coolant by yourself later down the road and potentially extend its lifespan.

Like other be quiet! products, silent operations is the main aim for Bw007.

This is why it’s equipped with two 140mm Pure Wings 2 fans with each having max. speed of 1600 RPM. Their 9-blade design makes them suitable for both static pressure and maximum airflow.

One thing you’ll have to keep in mind is that this cooler does not support AMD threadripper CPUs.

Like any CPU cooler, there are some shortcomings in BW007.

We believe that be quiet! could’ve implemented ARGB instead of simple white LEDs on the CPU Block. There’s no way to control the intensity of these LEDs and some people have reported them to be a little too bright.

Other than this, it’s also slightly louder at max. speed and the removal of pump from CPU block doesn’t result in a big improvement.

On the other hand, we really liked its GPU and RAM clearance, extra coolant, decent build quality, and three-year warranty.

The main thing in favor of BW007 is its low price. It’s almost 50 bucks cheaper than most 280mm AIOs which, depending on your budget, can be a big deal.