Most people only consider aesthetics when it comes to PC chassis.

Yes, the design and color scheme are important, but not as much as the airflow of a chassis.

No matter how many bells and whistles your chassis comes up with, it’s not worth it if the airflow is poor. 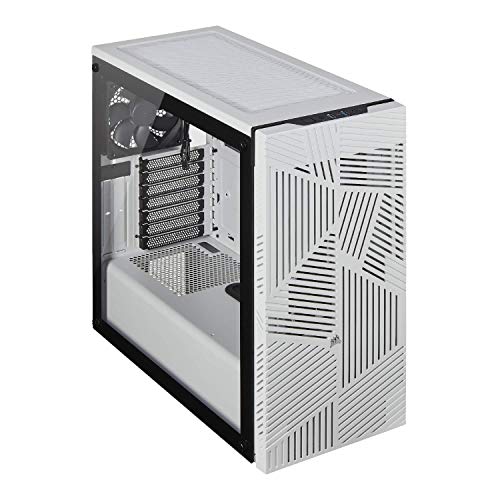 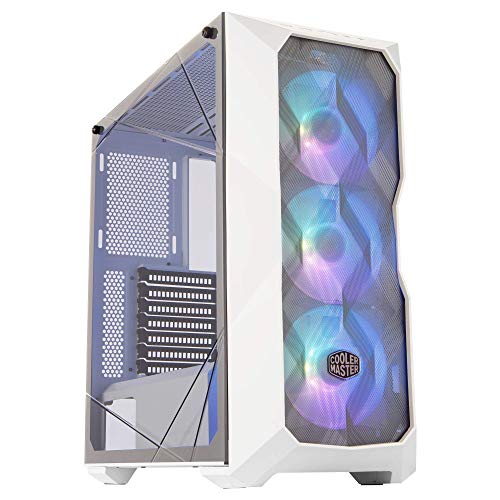 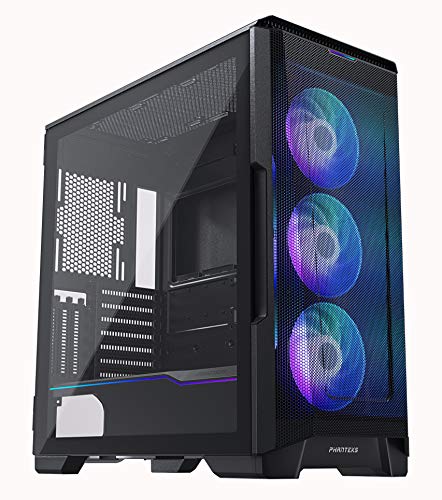 ATX cases generally have good airflow. But that doesn’t mean you should blindly pick a 2nd-grade model on eBay.

So let’s start off without any fuss.

The 275R Airflow is an affordable mid-tower by Corsair that focuses on airflow above anything else.

The first unique thing about this case are the criss-crossed vents on the front panel. This panel is securely attached (perhaps a little too secure) to the body and can only be removed when pushed from inside of the chassis.

It’s made up of ABS plastic, while rest of the case is built out of steel.

Behind this panel, you’ll get a mesh dust filter and two included intake case fans. You can also replace them with a 360mm rad of your own, but then you’ll have to remove the HDD cage.

For more info, check out our fan setup guide for 275R airflow.

Being an ATX case, you can use ATX, mATX, as well as mini-ITX motherboard with the 275R Airflow. Having a right motherboard is the key as even a slightly bigger model won’t fit here. To get some ideas, you can read our best motherboards for 275R airflow roundup.

As far as the connectivity options goes, you get two USB 3.1 ports with a microphone/headphone jack, along with the usual power/reset buttons. There’s no USB Type-C port which can be an issue depending on what devices you use.

From inside, the 275R airflow features a classic design. While you do get cable pass-through holes, rubber grommets, and zip-tie points for cable management, there’s no velcro-strap and cable-channeling.

It means that while you can still do proper cable management here, it’ll take a little extra effort on your part.

There’s no integrated RGB, but that’s totally accepted from a budget PC case.

On the plus side, we loved its unique exterior design, spacious internal areas, above-average airflow performance out of the box, and the option for vertical GPU mounting. But you’ll have to get the extra hardware separately for the latter.

Our next chassis is the Cooler Master TD500 Mesh.

Coming in at almost 120 bucks, it’s quite expensive compared to the Corsair 275R Airflow – and for many reasons.

It comes with a mesh front panel that can be easily removed when assembling the PC or cleaning it time to time. This panel is colored light grey and blocks some of the RGB coming out of those fans.

Underneath this panel, you’ll find three ARGB fans mounted outside the case body.

The rear area has the option for another fan but it’s not included in accessories. The top side has the standard magnetic dust filter and you can mount up to two 120mm/140mm fans or a 360mm rad there.

One downside of using a radiator on the top side is that it creates clearance issues if you’re having tall RAM modules on the motherboard.

There’s no USB-C port on the front panel and the dust filter on the PSU area is just clipped onto the case with no secure mechanism whatsoever.

The three fans at the front do a great job in keeping the temperature levels in check, but also increase the noise due to their higher speed. Thankfully, their fan curve can be adjusted (with an included 3-pin splitter cable) in the BIOS as per your preference.

Other than this, some users have reported the side-panel to be a little harder to reattach. Cable management is also not the best, but it doesn’t hinder the airflow in any meaningful way.

It’s available in both white and black colors so that you can choose one according to the rest of your components.

The last chassis in this roundup is Phanteks 500A.

It’s the bigger sibling to Phanteks P300A/P400A models, and is available in non-lighting as well as D-RGB variants.

In terms of design, it’s similar to the P600S premium chassis as both of them feature dual-system support, large-radiator support, and vertical GPU mounting (even for triple-slot graphics cards).

It only weighs 8 KG despite being an ATX case. This is certainly a good thing as you can move it around easily wherever you want.

Like other airflow-oriented cases, this one comes with a mesh front panel. This mesh consists of 1mm-thick perforated metal which’ll block most of the dust particles. Behind this panel, you’ll find three 140mm D-RGB fans. The only other area with lighting is the PSU shroud.

For those who don’t want, D-RGB (also called addressable RGB) allows you to customize the lighting of each individual LED of these fans.

The major difference here, however, is that these fans are mounted from inside the case – not outside.

If we move a little up, there’s the I/O panel on the top-front side which consist of two USB 3.0 ports, 1 USB Type-C port, one headphone/mic jack, LED mode/color buttons, and a power button.

The only complaint we have in this area is the average-quality magnetic dust filter on the top side.

The P500A is quite roomy from the inside and can accommodate any motherboard with up to 280mm width.

As far as the AIO mounting is concerned, you can remove those D-RGB fans from the front and install up to 420mm long radiator with up to 95mm thickness.

There a number of options for PSU compatibility too.

The main thing we liked in the P500A is the abundance of options.

It gives you tons of choices in terms of AIO support, storage devices, RGB customization, PSU compatibility, etc. Not only that, the material used in its construction is quite sturdy and, with the help of sliders and velcro ties, you get a pretty clean PC assembling experience.

If we were to nitpick any downside here, then it would be higher noise levels due to all these extra fans. On top of that, all the extra features we discussed above can easily overwhelm any beginner.

What is GPU Scaling