Ryzen has continued to impress me over the last few years and even today older models like the 2700X are holding ground as new processors come out. I honestly can talk about Ryzen until it gets a bit obnoxious.

AMD just keeps pumping out these incredible and potentially iconic processor iterations at an alarming speed. A couple like the 2700X though have stood out and those making custom builds have found going back a generation or two isn’t that problematic as the quality of Ryzen has just been phenomenal.

Where does Ryzen 7 fall?

The modern Ryzen 7 processors fall into the category of top-tier gaming CPU but can sometimes struggle to hit the raw power of the most expensive options when using something such as an RTX 2080 Ti.

The amount of money for the extra performance though is pretty pricey so the Ryzen 7 line has fallen into the best value for the average consumer. Even those who consider themselves enthusiasts may prefer these as they can roll extra cash into other parts of the build that have much better return rates.

The big brand names of processor design offer differing products but traditionally AMD has made things that overclock better, are cheaper, and perform better in multitasking situations such as designing Media or even Cryptocurrency.

Intel CPUs are fantastic in terms of stability and perform better in a lot of gaming situations although that performance gap is shrinking and you pay for the difference. 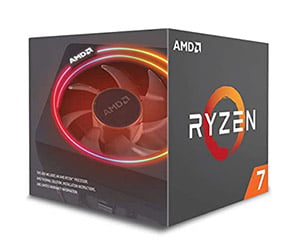 The 2700X is technically not the youngest processor on the block but that’s not as big of a deal as it sounds. With 8 cores and 16 threads the 2700X is a powerhouse and it does really well at tasks involving multitasking as well as 1440p gaming.

The 2700X comes overclockable out of the box and ready to get going. This year I actually purchased three of the competing i7-9700K’s from Intel which are around one generation up.

I was wavering between AMD and Intel for a long time and made a critical mistake! I found that Intel had dropped Hyper-Threading from i7s in the 9th-gen Intel Processors without making a lot of noise.

As a Media creator, this was devastating, game performance is fine but you see a significant drop in using programs for Media creation.

With the Ryzen 2700X, there is multi-threading meaning that you get the incredible gaming performance of a nice CPU but also can render video super fast. It’s really a dream CPU. 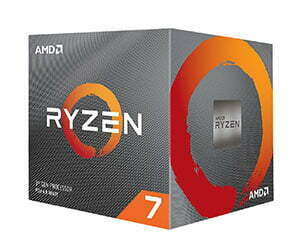 The Ryzen 7 3700X isn’t redefining the rules of the game. It’s an upgrade to the Ryzen 7 2700X and has a pretty hefty upgrade. On average games will change by about 30fps and the min FPS has an even larger difference in some games.

That means high framerate gaming gets a huge boon with the 3700X. Newer Intel products have some victory over this in gaming which is ok, Intel has been scared to death by AMD recently and has been working hard to compete.

On the flip side, the value offered by AMD right now is insane! With a Ryzen 7 3700X you are starting to see the maximum quality of a processor and the bottleneck has shifted mostly to the GPU when gaming.

Not only is this an incredible CPU, the price difference between the 2700X and 3700X means that saving up to purchase this is probably the better decision. In fact, the 3700X is still one of the best processors for RTX 3000 GPUs.

One of the areas that a good CPU affects is the speed at the lowest frame rate. Since games can’t always use all the power and speed of today’s modern processors, it’s important to hit good high fps but what’s most important is the minimum frame rate and the percentage of time spent in those moments.

The Ryzen 3700X greatly improves in that space (often as much as 16%) meaning that for those using 144Hz monitors or trying to do competitive gaming, this is a clear winner. The 30-40 frame difference along with the massive bump in stability means that the 3700X is just dominating the 2700X in games.

The 2700X is no slouch. If that’s the processor you get, you’ll still be stoked to see games melt before you in digital glory. I just know that this is a situation similar to picking between a 1660 Ti and RTX 2060 Super where a small amount of money has a pretty sizable improvement.

The clear winner is…

The 3700X. It’s pricier but outperforms the 2700X by a good margin in modern games and also is still pretty affordable. Honestly, AMD has made many clear winners this generation.

The Ryzen 5 3600 is another example of an awesome and affordable piece of gear that caught us by surprise.

be hesitant after all the years relying on Intel for our killer processors. Read the benchmarks, check out the specs. If it’s time for a processor upgrade, that allegiance to an old company might just not work out as well as you had hoped.

When I started switching I found that AMD had incorporated many features that Intel had just killed to make more cash. Ryzen has treated me well and as a content producer, I find that the speed I edit and make videos has increased.

It’s just boosted my productivity. Once again, thank you for taking the time to join this Hardware Roundup. We hope you found a product you enjoyed. Keep coming back for more articles on everything PC Gaming.